Iraqi Kurdistan security officials report that that the extremist group ISIS has released 216 Izadi prisoners after eight months of captivity, most of them children and the aged. 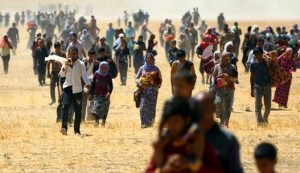 General Hiva Abdollah, the commander of Kurdish Peshmergas in Kirkuk, reported that the prisoners were released on April 8 and are in grave health, showing signs of severe weakness and emaciation.

He added that 40 children were among the released prisoners who have been transferred to Arbil, the capital of Iraq’s Kurdistan Region.

Eighty-thousand Izadis in northern Iraq have been displaced since ISIS forces began their advances. ISIS has been accused of genocide against the Izadis.

ISIS forces regard Izadis as heretics. No reason has yet been offered for the recent release of the Izadis.

Izadis live in Iraq, Syria, Turkey and Iran, and a large concentration of them live near Mosul, close to the Snajar Heights. Their population is estimated to be around 500,000 to 800,000.