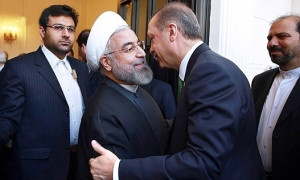 Erdogan’s visit comes after he made comments against Iran regarding the recent developments in Yemen, which drew fire from a number of Iranian MPs who called for his trip to be cancelled.

Erdogan was received by Minister of Communications Mahmoud Vaezi at Mehrabad Airport and by President Rohani at Saadabad Palace.
Erdogan is set to also meet with Iran’s Supreme Leader and discuss with Iranian authorities bilateral relations as well as regional and international issues such as the situations in Iraq, Yemen and Syria.

On Thursday March 26, Erdogan accused Iran of seeking “regional domination” and announced that Turkey supports Saudi Arabia’s military actions in Yemen. Saudi Arabia supports President Hadi and the forces that are still loyal to him against the growing control of Yemen’s Houthis. Iran is supporting the Houthis and has condemned Saudi actions in Yemen.

Despite the call from a number of Iranian MPs to cancel the Turkish president’s trip to Iran, Rohani did not make any statements in response to Erdogan. Iran is looking at expanding economic relations with Turkey in the petrochemical and transportation sectors.