Iranians take to the streets to cheer nuclear consensus

Iranian media report that people took to the streets of Tehran, Mashhad, Rasht, Shahrekord, Arak and Qasre Shirin on Friday night to celebrate the common ground reached between Iran and the 5+1 over the nuclear disputes. 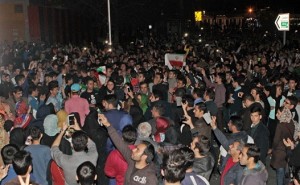 The Ana News Agency, which is linked to Iran’s Azad University, reported that after the news news circulated on social media, Tehran residents gathered on Valiasr Street, chanting slogans of support for President Rohani and Foreign Minister Mohammad Javad Zarif.

Meanwhile, the Islamic Republic News Agency (IRNA) reported that “a quiet gathering” in Rasht expressed joy and support for the framework agreement reached in the nuclear negotiations. IRNA reported a similar gathering in Kosar Square in Mashhad, with still more in Arak, Qadre Shirin and Share Kord.

The Ahwaz governor reported that people gathered at numerous locations across the city of Ahwaz to celebrate the consensus reached at the nuclear talks in Lausanne.