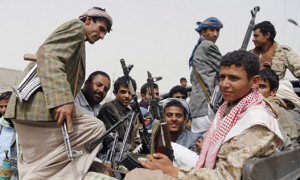 Afkham told IRNA on Tuesday March 31 that the agreement signed between Iranian airlines and Yemen is only for commercial and civil purposes, adding that “a number of flights have been made from Tehran to Sanaa carrying medical aid and the goods have all been delivered to the Red Crescent in Sanaa.”

The head of Iran’s Expediency Council, Ayatollah Hashemi Rafsanjani, also denounced the accusations against Iran, stressing that Iran has only delivered “medicine and food to Yemenites” and dismissing the accusations as “excuses made by invading states”.

Hadi made a case against Iran and the Houthis at the last gathering of the Arab League, calling for the Arab leaders to persist in their attacks on his country until the Houthis have laid down their arms.

Saudi Arabia has begun military operations in Yemen and the Saudi air force has been bombing Yemen since last Thursday.

Iran is the only country that has condemned the Saudi attack on Yemen.