An attack on a bus carrying Iranian pilgrims in Iraq on March 31 left at least one dead and several wounded. 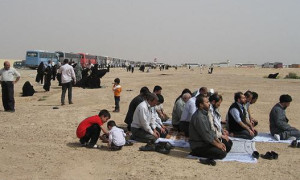 ISNA reports that the bus was on its way to Samarra, about nine kilometres north of Baghdad.

Iran’s Pilgrimage Department has announced that the bus was traveling on a route that the department had prohibited. The department adds that the pilgrim bus trip was not organized by the government agency but rather by a private company.

The Pilgrimage Department reports that Samarra was deleted from the list of pilgrimage destinations a year ago due to security concerns.

Organizing pilgrimage trips for Iranians has become a lucrative business, and some illegal businesses even forge visas for travelers.