At least eight people who took part in the funeral of Younes Asakereh, the street vendor who died following self-immolation in front of Khorramshahr City Hall, were arrested on their return to Ahwaz. 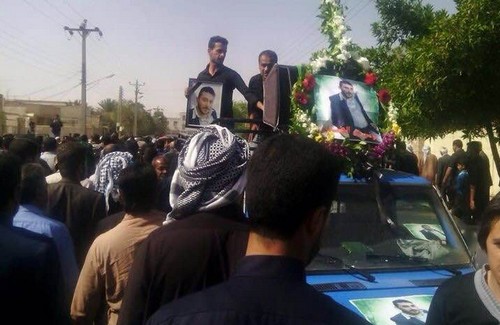 Asakereh set himself on fire after his street vending equipment was confiscated under a new city bylaw banning street vendors.

Reports indicate that Asakereh failed in his attempts to reclaim his possessions. The city officials expressed regret over Asakereh’s fate and urged citizens to appeal to superiors in case their matters are not adequately addressed by city representatives.

Reports indicate that some of the young men who attended the funeral were carrying a number of cold weapons, which may have been part of local traditional accessories.

According to the Human Rights Activists News Agency (HRANA), the funeral was under intense surveillance by security officers and a number of local officials also attended.

Last week, Asakereh’s death triggered conflict between police and numerous members of the Arab community during a football match in Ahwaz.